The government condemns the Houthi robbery of citizens’ lands and properties

The Minister of Information, Culture and Tourism, Muammar Al-Eryani, condemned, in the strongest terms, the feet of the Houthi militia terrorist Iran’s affiliates have carried out organized looting of the properties of citizens opposed to its coup project, including homes, lands and real estate, and the formation of committees to dispose of them in a dangerous escalation that ends any opportunities for dialogue, and a flagrant violation of international humanitarian law.

Al-Eryani warned businessmen and the general public in the hijacked capital, Sanaa, and the rest of the areas under the control of the Houthi militia. terrorist from being involved in the buying and selling of looted assets, as they are invalid procedures issued by a coup militia, and do not entail any legal effect.

Al-Eryani stressed that those involved in these actions, including legal persons, entities and individuals, whether working within those committees or those involved in disposing of these properties from buying and selling, bear legal and criminal responsibility towards those affected, and they will be held accountable and legal action will be taken against them after the coup has ended.

Al-Eryani called on the international community, the United Nations, and the UN and American envoys to issue a clear position on this dangerous development, which reveals the true position of the Houthi militia. terrorist From the peace process, its continuation of the escalation approach, and its flagrant violation of international resolutions and international human rights laws and covenants.

The Ministry of Legal Affairs and Human Rights has issued an urgent appeal to the United Nations and international organizations ...

The People’s Mobilization and Support Council in the capital’s secretariat conducted a supply convoy, cars and means of transportation for ... 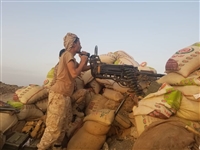 Today, Monday, the army forces, backed by the popular resistance and the Coalition to Support Legitimacy, achieved new victories on ...