The Minister of Information, Culture and Tourism Muammar Al-Eryani said, “The Houthi militia… terrorist Affiliate for Iran Clearly declares its goals of mobilization children In the areas under its control, the summer centers are in flagrant violation of international laws and conventions.

Muammar al-Eryani added in a statement to the Yemeni news agency (Saba) “The Houthi militia is speaking openly through its media about luring children to wash their minds with extremist ideas imported from Iran, training them to fight, and sending them to the battlefronts as fuel for its absurd battles and the implementation of Iranian expansionist policies.”

Al-Eryani pointed out that tens of thousands of children who are mobilized by Al-Houthi to his camps to booby-trapped them with his dark sectarian ideas and slogans of hatred and hatred, not only pose a threat to the social fabric and civil peace, but also constitute a time bomb to threaten regional and international security and peace, and the whole world will pay the price for it.

Al-Eryani said, “Unfortunately, the international community is silent in the face of the largest recruitment of children in the history of humanity, ignoring the dangers of this heinous crime on Yemen, the region and the world, and its disastrous effects on thousands of Yemeni children who have been deprived of their natural right to life, to be driven by Houthi to hell.”

The spokesman for the National Army, Brigadier General Abdo Majali, said, “The total of the weapons and equipment of the ... 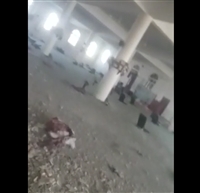 The outcome of the bombardment launched by the Iranian Houthi militia on the Al-Amoud area in the Al-Juba district, south ...

Minister of Information, Culture and Tourism Muammar Al-Iryani said, “The statements of the leaders of the Iranian-backed Houthi militia about ...