The Minister of Information, Muammar Al-Eryani, called on the UN and US envoys, human rights organizations and the protection of journalists to carry out their legal, humanitarian and moral responsibilities, and to put pressure on the Houthi terrorist militia to abolish the death sentences against journalists, release them unconditionally, and end their tragedy and the suffering of their families.

Al-Eryani said that the International Day Against the Death Penalty is an occasion to remind four journalists who were kidnapped and forcibly disappeared by the Iranian-backed Houthi militia, who practiced the worst forms of psychological and physical torture against them, and issued death orders against them in formal trials on trumped-up charges against the background of their political views and stances.

The four journalists who were sentenced to death by the militias are Abdul-Khaleq Omran, Akram Al-Walidy, Tawfiq Al-Mansoori, and Harith Hamid.

Al-Eryani explained in a statement to Saba Agency, that this anniversary comes days after the crime of mass murder carried out by the terrorist Houthi militia against nine civilians from Hodeidah Governorate, including a child, after years of enforced disappearance and brutal torture, and subjecting them to a mock trial in which they were deprived of their most basic rights. Initiation of mass killings.

He called on the international community to pressure the terrorist Houthi militia to stop using the judiciary under its control as a tool to settle its political accounts and kill opponents of its coup project, in flagrant violation of international laws and conventions, foremost of which is the Universal Declaration of Human Rights.

Never before has a Yemeni issue topped on social media, especially on Twitter, the global trend, as is the case ... 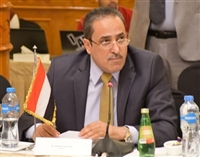 The head of the National Alliance of Political Parties and Forces – a member of the General Secretariat of the ...

An official source in the Saudi Ministry of Energy said, today, Friday, that the petroleum products distribution station in northern ...