The Prime Minister, Dr. Maeen Abdul-Malik, emphasized that the land, sea and air ports are a true artery to support the national economy, which necessitates the need to pay attention to it and not allow any situation of complacency, neglect and corruption in it, and in a way that leads to real development that reflects on the economy in general and local communities in particular.

This came during his presidency today in the temporary capital Aden, a joint meeting that included the ministries and relevant authorities, which was devoted to discussing the existing imbalances in the ports and unifying efforts and tasks in accordance with the laws and legislation in force, in addition to organizing relations with the local authorities in this aspect, in a way that will positively affect the development of revenues. Public and local.

The meeting approved the formation of a joint committee from the ministries of transport, finance, interior, defense, the Central Organization for Control and Accounting, and the two national and political security agencies, which undertakes field visits to the outlets to find out all the existing problems and solve them, in addition to evaluating performance during the previous period and what can be done to develop its performance, ensure the flow of work, unify procedures and control Revenue collection and non-overlapping tasks and powers.

The meeting affirmed that the committee should define its tasks and the mechanisms by which it will act, and the necessity to urgently go to the ports and submit a report on what it has accomplished to present it to the Council of Ministers, and to take any measures that help achieve the goals and address the existing imbalances.

Participants in the meeting put forward a number of proposals to assist the committee in carrying out its work within an integrated approach between ministries and the competent authorities, and what can be done to build a healthy relationship with local authorities … indicating the need to activate the work of the Supreme Committee to Combat Smuggling.

The Prime Minister pointed out that the great challenges the national economy is going through prompts us to think about the future and build a solid real economy that goes beyond relying on traditional revenues, stressing that no imbalances or corruption in the outlets or others will be tolerated, and all deterrent measures to combat corruption will be activated. And controlling public revenues.

"corruption" Action Allow Any at It Ports Sahwa Net Sahwa Net news site Says the awakening the government: To whom will not

Today, the Undersecretary of Marib Governorate, Dr. Abd Rabbo Moftah, discussed with the head of the Red Cross delegation in ... 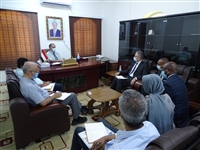 The Minister of Public Health and Population, Dr. Qassem Baheeh, discussed today in the temporary capital Aden, with the representative ...

The Secretary-General of the Yemeni Rally for Reform, Mr. Abdul Wahab Al-Ansi, sent a cable of condolences and sympathy to ...