On Tuesday, March 30, 2021, the Yemeni government sent a report to the Security Council, proving the relationship and cooperation between the Houthi militia and terrorist organizations such as ISIS and Al-Qaeda in Yemen.

The Yemeni mission to the United Nations delivered the report, consisting of 21 pages, in three languages, Arabic, English and French, to the President of the UN Security Council, US Ambassador Linda Thomas Greenfield, addressed to her and to the members of the Security Council.

He pointed out that al-Qaeda evacuated several areas and handed them over to the Houthis to circumvent the army, and that ISIS fighters fought in the ranks of the Houthis, and that the National Army captured al-Qaeda members who fought with the Houthis.

The report also indicated, supported by pictures and tables, that this Houthi relationship with terrorist organizations has reached the point of joint coordination, and the exchange of roles that threaten the security, stability, unity of Yemen and its regional surroundings, and international shipping lines, in an inevitable way for the international community that raises the flag of the war on terror, according to the Yemeni message, To carry out his responsibilities to support the legitimate government in confronting these Houthi militias and other terrorist organizations.

The letter called for the importance of adopting the classification of the Houthi militia on the terrorist list.

Al Houthi Alliance And the base board ISIS" militia Orientation Prove report Sahwa Net Sahwa Net news site Security: the awakening the government: to me To whom With 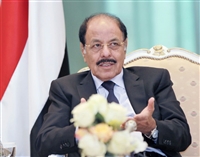 Vice President of the Republic, Lieutenant General Ali Mohsen Saleh, confirmed that the announcement of the formation of the government ...

The Prime Minister, Dr. Maeen Abdul-Malik affirmed that the general program for the government of political competencies, which was approved ...

The Republic of Yemen has strongly condemned the launch by the Houthi militia of a (booby-trapped) drone towards Abha International ...