Top Stories The Prime Minister: The targeting of Aden airport was carried out with guided missiles, and the investigations indicate that the militias are behind it

The Prime Minister: The targeting of Aden airport was carried out with guided missiles, and the investigations indicate that the militias are behind it 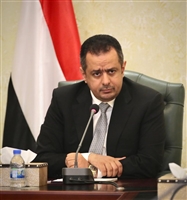 Prime Minister Dr. Muin Abdul-Malik confirmed that the preliminary indications of the investigations into the terrorist attack on Aden International Airport indicate that the Houthi coup militia is behind this attack, which was carried out with guided missiles.

He said during a speech at the government meeting that there is intelligence and military information about the presence of Iranian experts who were present to take over these actions.

“When we talk about the Houthi militia, this leads us to talk about Iran and its sabotage project in the region by threatening international shipping and blackmailing the world through its arms and proxies from the militias in the region,” the prime minister added.

He explained, that this terrorist attack is a clear message from the Houthi militia to the Yemeni people and the international community that they are only tools for Iran and are not serious about peace .. indicating that targeting the government is a target for peace and confirming that this terrorist militia will continue its work.

And he stressed the need for the condemnation of the United Nations and the international community to go beyond mere denunciations of referring to those who committed this terrorist attack clearly and without equivocation.

“The international community is still discussing classifying the Houthis as a terrorist group, as for us in Yemen, the matter is clear, and the actions and crimes of these militias prove that they are a terrorist organization,” added Dr. Muin Abdul-Malik.

He explained that this shocking and unprecedented terrorist attack targeting a civilian airport, and those terrifying images of the victims, including employees of the International Red Cross and many personalities, including journalists, are a clear expression of the nature of this militia and its criminal acts.

He pointed out that His Excellency the President of the Republic continued to follow up on the consequences of this terrorist incident and his immediate directives to form a committee of investigation and safety of the members of the government and to ensure that this does not affect its performance of its tasks and responsibilities, stressing that the legitimate government’s keenness to bring peace and make concessions for this will not be at the expense of the continuation of the militia. Houthi coup in bloodshed.

The Prime Minister directed the Ministries of Foreign Affairs and Expatriates and Legal Affairs and Human Rights to begin preparing an integrated file on the terrorist attack and submitting it to the United Nations, international organizations concerned with human rights and the international community … stressing the need to complete the investigations and complete the committee formed by the President of the Republic its procedures as soon as possible.

The Prime Minister saluted the restraint of the members of the government during the terrorist attack and their contribution to saving the victims in this heinous incident that shook Yemen as a whole.

He explained that this government has no way but to succeed, and it will be more solid in the next stage until Yemen regains its health, and we will not fear threats, no matter how dangerous they are, and nothing at this stage is tempting in any position. Yemeni.

Aden Airport And investigations Behind him directed Done Indicate Militias .. Ministers President Sahwa Net Sahwa Net news site stand Targeting the awakening to me To whom With missiles

Hana, a housewife in Sana’a and a mother of five children, expresses with satisfaction her joy that the days of ...

Muammar Al-Eryani, Minister of Information, Culture and Tourism, said, “The rulings issued by the military court against the criminal Abdul-Malik ...

The Houthi militia has again used cooking gas as a tool to humiliate and blackmail residents in the capital’s neighborhoods ...