The family of the leader, Muhammad Qahtan, a member of the Supreme Council of the Yemeni Congregation for Reform, held the Iranian Houthi militia responsible for his life and safety, and renewed its call for his speedy release.

In a statement obtained by Al-Sahwa Net, the Qahtan family said, “It is I followed the statement of Sultan Al-Sami, a member of the so-called Houthi Political Council in Sanaa, on Al-Mahariya TV on Sunday evening 4/10/2022, in which he indicated that the politician Muhammad Qahtan is not with the Houthis and that they did not kidnap him and that the party that kidnapped him is the group of former President Ali Abdullah Saleh, to the latest in his statement, which is the first official statement from a leader in the Houthi Political Council.

The Qahtan family confirmed that the kidnapped Muhammad Qahtan was the party that kidnapped him from his home on the fifth of April 2015, the Houthi group, and that the head of the so-called Houthi political council in Sana’a, Mahdi al-Mashat, was present at the place where Muhammad Qahtan was kidnapped when Abdul Rahman Muhammad Qahtan visited his father. Through the mediation of Abdel-Qader Hilal, five days after the kidnapping, to take clothes for his father, noting that this is the only visit that his family has been allowed to, and after that, no means of communication or meeting with him was allowed.

And the Specialized Criminal Prosecution, under the control of al-Houthi, had previously issued a memorandum to the Political Security to release him on 5/2/2019, which is a confirmation from one of their affiliates of the presence of the politician Qahtan with them.

The Qahtan family was amazed and denounced these statements, which aim to mix papers and escape responsibility for the fate of the politician Muhammad Qahtan, and to circumvent his exclusion from the planned exchange deal.

The Qahtan family held the Houthi group responsible for the life and safety of Professor Muhammad Qahtan, and we demand his release, as it is the party that kidnapped him and bears full responsibility for his life and safety.

She stressed that these statements do not serve the political track or the desired peace, but rather complicate matters and put obstacles in the way of peace and the intentions of peace. turning off The war that burdened the country for eight years, and compounded the tragedy of depriving his family of visiting him or communicating with him, and their suffering as a result of this kidnapping and enforced disappearance.

about him.. Al-Sahwa Net news website and renewed Awakening Net family his safety Houthi I called her militia Qahtan Quickly release Responsible the awakening To bear To whom 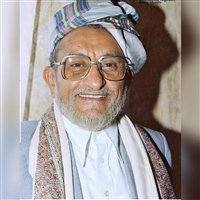 President Abd Rabbo Mansour Hadi, President of the Republic, sent today a message of condolences and sympathy for the death ...

Today, in the temporary capital, Aden, Minister of Public Health and Population, Dr. Qassem Buhaibah, discussed with the Emergency Officer ...

Prime Minister Dr. Maeen Abdulmalik received today in the temporary capital of Aden, the European Union delegation and ambassadors of ...