Top Stories The US State Department: We intend to take additional measures to hold the leadership of the Houthi militia accountable

The US State Department: We intend to take additional measures to hold the leadership of the Houthi militia accountable

Washington said on Monday that it is studying additional steps to hold accountable the leadership of the Iranian-backed terrorist Houthi militia, in light of its continuing anti-peace behavior in Yemen.

“The United States is considering taking additional steps to enhance accountability for the Houthi leadership,” State Department spokesman Ned Price said, stressing that “the behavior of militia leaders must change to make progress in achieving peace.”

He pointed out that “the political track in Yemen must support the military track.”

He noted, “The United States believes that the process of finding a negotiated settlement to the conflict in Yemen is gaining momentum thanks to Saudi Arabia’s cooperation.”

The US State Department spokesman said, “The US envoy to Yemen is working closely in the region with the hope of ending the conflict.”

For his part, US Secretary of State Anthony Blinken said, “Saudi Arabia and the Yemeni government are” committed and keen “to find a way to end the war in Yemen, and called on the Houthi group to” emulate this commitment. “

In a speech at the United Nations Humanitarian Pledges Conference, “The Saudis and the government of the Republic of Yemen are committed and eager to find a solution to the conflict. We call on the Houthis to emulate this commitment. The necessary first step is for them to stop their attack on Marib,” according to Reuters. 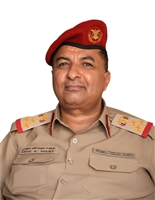 The official spokesman of the National Army, Brigadier General Abdo Majali, called on the United Nations and international organizations to ...

The US special envoy to Yemen, Tim Lenderking, said today, Thursday, that the humanitarian situation in Yemen puts civilians there ...

The leader of the Islah party in Hadramout, Fuad Barboud, said that Islah is still making sacrifices for standing on ...