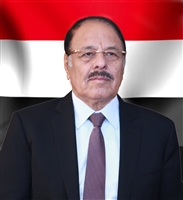 The Yemeni news agency “Saba” reported that the Vice President of the Republic, Lieutenant-General Ali Mohsen Saleh, made a phone call today to the Governor of Shabwa Governorate, Muhammad Saleh bin Adyo, to follow up on field developments and review the construction and development efforts in the governorate.

During the call, the Vice President of the Republic listened to the developments in the field and the conditions of the heroic fighters who are controlling the most wonderful heroic epics on the fronts and fields of freedom and dignity against the Iranian Houthi militias.. He praised the various efforts and heroisms fought by the heroes of the army and resistance and the tribesmen for Ahrar and the victories they achieved against the priesthood militia. Iranian Houthi.

The Vice President urged to redouble efforts to meet the requirements of the citizens and deter the Houthi sectarian coup militias.. He called for unifying efforts and gathering the word to restore state institutions and end the suffering and injustice of the Yemeni people.

The Vice President of the Republic renewed his thanks and appreciation for the positions of the brothers in the coalition to support legitimacy led by the sisterly Kingdom of Saudi Arabia and their role in supporting legitimacy and the efforts of the armed forces in the fateful joint Arab battle.

For his part, the Governor of Shabwa Governorate, expressed his appreciation for the attention and follow-up of the political leadership, stressing that the local authority and all the free people of Shabwa continue to support legitimacy and confront projects of coup, sabotage and terrorism until achieving security and stability in Yemen and building its desired federal state.

The Executive Unit for the Management of Displaced Persons Camps Management in Marib Governorate said that the World Food Program ...

In preparation for the next Security Council session on the Yemeni situation, the United States raised the level of its ...

Yemeni academic sources revealed to the newspaper “Okaz” that a Houthi organization is spying on university students and recruiting them, ...