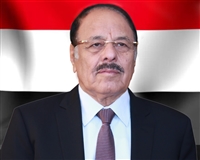 Today, Vice President of the Republic, Lieutenant General Ali Mohsen Saleh, made two phone calls to the Governor of Taiz Governorate, Nabil Shamsan, and the Commander of the Taiz Corridor, Major General Khaled Fadel, to review developments, the citizens’ conditions, and the efforts to complete the liberation of the governorate and lay the foundations of security and stability.

The Vice President saluted the eternal epics of the brave heroes of the army and the resistance and the free people of the province on the various fronts of the province, praising the field victories they are achieving in the face of the Iranian Houthi coup terrorist militia.

During the two calls, the Vice President referred to the violations and crimes committed by terrorist militias, including sniping children and civilians, destroying infrastructure, targeting schools and hospitals, bombing homes and public and private facilities, converting the Yemeni people between displaced, homeless and displaced, and the militias ’pursuit of a policy of starvation and impoverishment and its deliberate humiliation of the dear Yemeni people.

The Vice President affirmed that the recent Houthi escalation and targeting of the Ma’rib Governorate, which hosts millions of displaced people, and its continuing attacks against the people of Taiz, Al-Hodeidah, Al-Jawf, Taiz, Al-Dhale’e, Al-Bayda and others, and its intensification of launching ballistic missiles and drones towards our brothers in the Kingdom, all practices reveal the hostility of the Houthis to everything that he might have. Achieving security, stability and peace for Yemen and the Yemenis, and the imminent threat it poses to Yemen, the region and the region, and its absolute dependence on the directives of the Tehran mullahs and Iran’s sabotage policy.

The Vice President expressed his appreciation for the sincere role of the brothers in the countries of the coalition to support legitimacy under the leadership of the Kingdom of Saudi Arabia and their support for the legitimacy and the national army, and what this cohesion embodies in terms of the oneism of the battle and the one brotherly destiny.

The vice president listened to a brief from the governor of the province and the leader of the Axis about the field developments, the conduct of military operations, and the high morale and resilience of the heroic fighters in the face of the priestly militia.

The governor of the governorate, Nabil Shamsan, also stressed the mobilization of all energies and capabilities and the gathering of all political, community and popular components as well as the heroic fighters to complete the liberation of the province and liberate all parts of Yemen in a way that would restore the Yemeni state and end the Iranian Houthi terrorist coup.

Information Minister Muammar Al-Iryani said, “The escalation of the Iranian-backed Houthi militia, its failed attacks on civilian objects and civilians ...

The Chairman of the Presidential Leadership Council, President Dr. Rashad Muhammad Al-Alimi, and with him the members of the Council ...