Top Stories Thebany team, a leadership of thought and struggle..a symposium in Marib coinciding with the activities of the martyr’s forty

Thebany team, a leadership of thought and struggle..a symposium in Marib coinciding with the activities of the martyr’s forty

A number of military leaders confirmed that the martyrdom of Commander Lieutenant-General Nasser Al-Thibani ignited the victories achieved by the heroes of the National Army and the resistance men on the various fronts south and west of Ma’rib.

In the intellectual symposium held by the Department of Moral Guidance, Ibb Axis, and the Supreme Council for Resistance of Ibb in the city of Ma’rib, entitled: (Lieutenant-General Nasser Al-Thibani..leadership..thought..struggle), they unanimously agreed that the martyr leader Al-Thibani was the deaf rock on which the dreams of Iran’s Houthi militia were shattered. And the impenetrable dam that stood in front of the militia’s advances towards Ma’rib.

In the symposium, Major General Muhammad Al-Hubaishi, Advisor to the Minister of Defense, described the martyr Commander Al-Thibani as a comprehensive college in the military struggle, the most incapable of leaders who will come after him.

Al-Hubaishi affirmed that he had never seen in his life a person with the seriousness, perseverance and courage of Abu Munir, noting that “the martyr became a symbol of the Republic with the thought, struggle and sacrifice he carried.”

Meanwhile, the Director of the Moral Guidance Department of the Armed Forces – Brigadier General Ahmed Al-Ashwal confirmed that the Thibani martyr “Nasser Al-Jumhuriya” carried on his shoulders the project of defending the homeland and the nation, and he continued to wander around and fight the Houthi militia on various fronts until he was martyred in an unplanned future.

He pointed out, “The blood of the martyr the leader and the blood of the martyrs were fuel for the victories that the heroes of the national army, the giants brigades, the popular resistance and all the honorable sons of Yemen were winning with the support of the Arab coalition.”

In the symposium, which coincides with the commemoration of the fortieth anniversary of the martyr leader Lieutenant General Nasser Al-Thibani, Al-Ashwal spoke about a number of virtues and heroic stances of the martyr, as he instilled enthusiasm and raised morale in the hearts of the heroes every time they heard his name, or the sound of his call in the communication devices, adding: “I knew him all The fronts and sites and the barricades embraced him, as he abused the Iranian terrorist militia the most, to the extent that his voice or his name “Abu Munir” threw terror into the hearts of the Houthi enemies, and fears were shattered in their bodies all they heard about, even if the battle did not start.

The director of the Moral Guidance Department pointed out that “the free people of Yemen are commemorating the fortieth of martyr Abu Munir, while the Houthi militia is holding its funerals in the home of its Iranian master, Hassan Airlo, in our kidnapped capital, and there is a difference between this and that.”

While the commander of the Ibb axis, Brigadier General Ahmed Al-Bahsh, listed some of the characteristics of the martyred leader, saying: “The martyr was a soldier and a strategic planner at the level of the Ministry of Defense. You find him an artillery officer, and you find him a reconnaissance column.

Brigadier-General Al-Bahsh indicated that the martyr, while he was still at the National Defense College for Military Sciences several years ago, is keen to collect information about the expansion of the Iranian threat and its impact on Yemen and the Arab world.

For his part, Colonel Khaled Al-Farah spoke about the national and intellectual dimension of the martyr Al-Thibani, through his presentation of the martyr’s message for which he was awarded a fellowship of the National Defense College, entitled (Iranian interference in the Arab region and its danger to Yemeni and Arab national security and the strategy to confront it).

"A seminar Al-Sahwa Net news website And struggle Awakening Net Events Forty in a in sync Leadership Marib .. martyr the awakening the team Thebany Thought To whom With 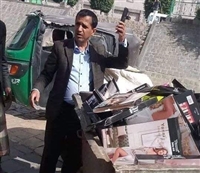 Muammar Al-Eryani, Minister of Information, Culture and Tourism, said that the campaigns launched by the Iranian-backed Houthi militia against clothing ...

The United Nations announced the removal of all political, security and logistical obstacles to the process of starting the transfer ...

The spokesman for the blind army, Abdo Majali, said, “The recent military operations of the army were distinguished by their ...