Top Stories This evening.. an electronic campaign to denounce the siege on slavery and the Houthi crimes of genocide against civilians

This evening.. an electronic campaign to denounce the siege on slavery and the Houthi crimes of genocide against civilians

This evening, Saturday, October 16, 2021, a wide cartoon campaign will be launched to denounce the Houthi siege imposed on the Abdiya district, south of Marib.

The campaign will start at 7:30 pm today, Saturday, under the hashtag #Al-Abdiyyah_Talk to Humanity #Al-Houthi_Besiege_Al-Abdiyyah.

The campaign organizers called on all journalists and activists to participate in the campaign, denouncing the deadly siege imposed by the Houthi militia on the Abdiya district a month ago, and the global silence towards the war crimes and genocide that civilians are subjected to.

And on Wednesday, the health authorities in Marib, Al-Abdiya district, declared a disaster area, where a human tragedy is living as a result of the applied siege, and the bombing of the only hospital in it.

The suffocating siege imposed by the Houthi militia on 35,000 people, the majority of whom are women, children and the elderly, has caused the majority of its residents to run out of food.

Al-Houthi militias have imposed a suffocating siege from all sides on Al-Abdiyya for about a month, preventing the arrival of food and medicine and the evacuation of the wounded.

The militias also continue to target the Directorate with ballistic missiles and all kinds of heavy weapons, and commit the most heinous crimes against the civilian population, in flagrant violation of all human rights principles and the rules of international humanitarian law.

The Minister of Information, Culture and Tourism, Muammar Al-Eryani, condemned the horrific massacre committed by the Houthi militia terrorist Iranian-backed ...

A state of anxiety and fear is prevailing in the street in Sana’a and its environs in the governorates due ... 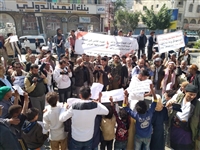 The branch of the National Association of Martyrs’ Families in Taiz governorate carried out this morning, Wednesday, a protest to ...