Two Yemeni officials: International trial of Houthi leaders is the next step

The Yemeni Undersecretary of the Ministry of Information, Abdul Basit Al-Qaedi, revealed the government’s determination, with the support of the Coalition to Support Legitimacy, to pursue the terrorist Houthi leaders and submit their files to the International Court to punish them as war criminals. Describe the piracy of ships and their launching of missiles and drones on Saudi Arabia and the UAE.

Al-Qaedi told Okaz newspaper: “The characterization acquires its importance, as it is under Chapter VII, and came in the context of approving the contents of the report of the international expert group formed on the Security Council Committee in accordance with Resolution 2140 issued in 2014. Procedural procedures, including the freezing of funds and the prosecution of its leaders.

He pointed out that the resolution confirms that the conviction of the international community is constantly being strengthened about the step that the terrorist Houthi militia takes on regional and international peace and security, and this needs to intensify work on this conviction and turn it into decisions that take effect and lead to the prosecution of the leaders of this militia and the drying up of its sources.

In turn, the Yemeni Deputy Minister of Transport Nasser Sharif stressed the need to raise the ceiling of local and international demands and to submit the files of the Houthi militia criminals to the UN Security Council, stressing that the Yemeni government is working with great efforts alongside Saudi and Emirati diplomacy to expose these crimes and present them in international forums.

Sharif said: “Resolution 2624 represents a positive step, but the victory for Yemeni humanity is a colossal step from the diplomacy of the coalition to support legitimacy, but we need more work to expose Houthi crimes and punish them internationally.” Exploding international shipping lines.

A new international report confirmed that the noticeable rise in fuel prices in areas under the control of the Houthi ...

The Supreme Coordination of the Yemeni Revolution – Youth in Taiz Governorate organized this morning a political symposium within the ... 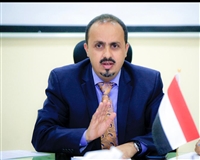 The Minister of Information, Culture and Tourism, Muammar Al-Eryani, said: Evidence Presented by the spokesman of the Coalition to Support ...