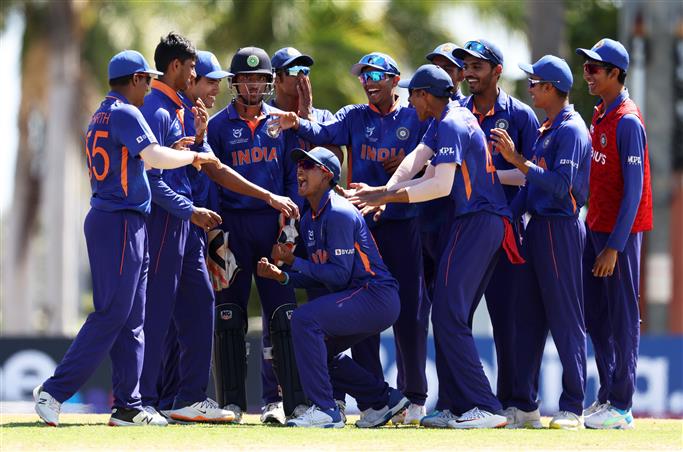 Left-arm pacer Ravi Kumar bowled a sensational opening spell as India exacted sweet revenge on Bangladesh, knocking out the defending champions to enter the semifinals of the U-19 World Cup here.

In the last edition of the tournament, India had lost to Bangladesh in the title clash. Four-time champions India will meet Australia in the semifinals on February 2.

The son of a CRPF personnel, the Uttar Pradesh-born Ravi, who has followed in the footsteps of his illustrious state senior Mohammed Shami to ply his trade for West Bengal, ended with excellent figures of 3/14 off seven overs as Bangladesh were bowled out for 111 in 37.1 overs on Saturday.

In reply, India chased down the target in 30.5 overs, losing five wickets, with opener Angkrish Raghuvanshi’s 44 being the top score. Skipper Yash Dhull made 20 not out and his deputy Shaik Rasheed contributed 26. The victory was particularly satisfying considering several players had returned to action after recovering from Covid-19, due to which they had missed two matches.

It was a fitting reply from the ‘Boys in Blue’ after their predecessors lost an ill-tempered final of the 2020 edition, which was followed by boorish behavior from both sides. For the current batch, the win was also crucial as they were beaten twice by the same side last year in Kolkata. — PTI

A few months back, Ravi Kumar was just another outstation cricketer plying his trade in Kolkata club cricket. The 18-year-old had his share of twists and turns before he became the pace spearhead for India colts at the tournament. According to Cricket Association of Bengal (CAB) insiders, it is learned that the left-arm pacer, who played for Ballygunge United, had come for U-16 Bengal trials in 2019 but was rejected after he failed to clear the TW3 (Bone test for age verification) test. However, a good CAB T20 tournament for Kanchenjungha Warriors got him into the reckoning for Bengal U-19. Former India opener Devang Gandhi and bowling coach Jayanta Ghosh Dastidar worked with him. “He is a very hardworking boy and if you ask me, Devang worked a lot on his mental aspect,” Dastidar said

Glasgow Indian footballer Bala Devi scored her first goal for the Rangers FC in a 9-0 decimation of Motherwell FC ... New Delhi, December 14 Kirti Azad, a member of the 1983 World Cup-winning squad, has applied for a selector’s position ...

Mumbai, April 30 Continuing with his on-field cause activism, Mumbai Indians skipper Rohit Sharma once again stepped onto the field ...