Top Stories Vice President of the UN Envoy: The international role must be more firm and serious

Vice President of the UN Envoy: The international role must be more firm and serious

The Vice President of the Republic, Lieutenant-General Ali Mohsen Saleh, said that the pressing international role is seen as still below the desired level, pointing out that the victims of Houthi terrorism were and still rely on a more assertive and serious international role to stop the arrogance and intransigence of the militias whose decision Iran controls.

This came during his meeting with the Special Envoy of the United Nations Secretary-General for Yemen, Hans Grundberg, to discuss various developments and UN efforts to bring peace, according to the Yemeni news agency “Saba”.

The Vice President noted that at a time when millions of civilians and displaced people in Marib, Shabwah and other Yemeni cities and other cities in the Kingdom are under the threat of bombing and Houthi attacks.

During the meeting, the Vice President praised the unremitting efforts made by the UN envoy since assuming his new mission as UN envoy to Yemen, reiterating that the war waged by legitimacy, under the leadership of President Abd Rabbo Mansour Hadi, President of the Republic, is a defensive war, and stems from a fixed principle represented in adhering to the built-in peace option. On the three references and positive interaction with international efforts and various peace initiatives, the latest of which was the initiative of the brothers in the Kingdom of Saudi Arabia, which was welcomed by legitimacy, the region and the international community, and rejected by the Houthi militia and Iran.

During the meeting, the Vice President briefed the UN envoy on a number of practices committed by the Houthi coup militia, which reveal their intentional obstruction of all peace efforts, compounding the suffering of the Yemeni people and deepening their humanitarian crisis, which it became clear to the world that it is the last concern of the Houthi coup group.

The Vice President of the Republic clarified a number of these practices, the foremost of which is the escalation of the Houthi militias and their continuous attacks on populated cities, foremost of which is the city of Marib, which is crowded with three million displaced people, and the launching of ballistic missiles and drones on residential neighborhoods and vital facilities, including the port of Mocha, relief aid stores and civilian objects in the Kingdom. Sister Saudi Arabia and the threat to international navigation, as well as its criminal practices in its areas of control, including mass executions, killing, kidnapping and starvation, all of which reveal the true concept of the idea of ​​peace among the Houthis.

The Vice President referred to the responsibility placed on the shoulders of the international community regarding the Houthi practices that obstruct the various peace endeavors, noting the Houthi group’s negative exploitation of the Stockholm Agreement and their disavowal of its implementation, and taking it as an opportunity to mobilize and import Iranian weapons and continue to destabilize security and stability and threaten international navigation.

Al-Sahwa Net Al-Sahwa Net news website and serious assertive he is International internationalist.. More President Role should that the awakening to the envoy To whom Vice

The Minister of Information, Culture and Tourism, Muammar Al-Eryani, praised the steadfastness of the Ma’rib Governorate, which humiliated the Tehran ... 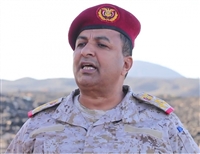 The spokesman for the armed forces, Brigadier General Abdo Majali, said that designating the rebel Houthi militia as a terrorist ...

Western sources revealed to “Asharq Al-Awsat” newspaper about an international move to hold the Houthis responsible for obstructing the ceasefire ...