Top Stories What do the people of Taiz want from the UN envoy to Yemen?

What do the people of Taiz want from the UN envoy to Yemen?

Since the entry into force of the UN truce in Yemen, the Houthi siege on the city of Taiz has returned to the spotlight as a humanitarian issue that topped the international community’s priorities, and the UN envoy for Yemen, Hans Grundberg, began negotiations in Jordan to open major corridors to Taiz between the delegations of the Yemeni government and the Houthi militia.

However, weeks after the end of the first truce and its renewal for an additional two months, and the continued opening of the Hodeidah port and Sanaa airport by the government, the Houthi militias continue to besiege the city and refuse to implement their commitments, so what do the people of Taiz want today from the UN envoy to Yemen?

In response to this question, the head of the Taiz Human Rights Center, Mazen Aqlan, believes that what the people of Taiz want from the envoy and the international community is a genuine humanitarian entitlement to open all the main roads leading to Taiz governorate, the “Taiz-Hodeidah” road, the “Taiz-Sana’a” road. Taiz – Aden” in implementation of the declared UN armistice.

In an interview with Al-Sahwa Net, he said, “The difficult humanitarian conditions experienced by the residents of Taiz make it imperative for the UN envoy to deal with the issue of the siege more seriously and responsibly, and to implement urgently to open the main roads leading to the governorate, as happened with the rest of the other issues within the humanitarian truce from Fatah to Sana’a airport. and the port of Hodeidah.

Aqlan stressed the need for the envoy and the nations to stop deporting suffering and evading the implementation of the full entitlements of the declared armistice clauses, and making the Houthi militia the only beneficiary of it, without bringing any benefit to civilians and mitigating the effects of the war on them.

The UN envoy demanded that real efforts be made and pressure on the Houthi militia to implement the opening of the main roads in Taiz, based on the armistice and the outcomes of consultations. JordanAnd not to be satisfied with consuming statements that have no effect on the ground, his credibility is at stake.

For his part, Moaz al-Sharabi (a resident of the governorate) said, “The UN envoy announced the truce last April, and the legitimate government accepted it and made great concessions, and Sanaa airport and the port of Hodeidah were opened, and despite the end of the first truce and entering into a second truce, the Houthi siege still exists, and may end without lifting it. “.

Al-Sharabi questioned how to renew the truce for two additional months without making any progress during the first truce in the issue of lifting the siege, calling on the UN envoy to reveal and identify the party obstructing the lifting of the siege on the city, pointing out that the silence of the UN envoy is unjustified, and is not neutrality, but rather a bias towards the militias.

Photojournalist Ahmed Al-Basha confirms that what the people of Taiz want from the UN envoy is to use pressure to open roads in Taiz and other governorates. Other According to the proposal, the implementation of the entire provisions of the armistice, or a press conference to reveal the party obstructing peace efforts in Yemen.

Al-Basha added, “What is happening so far are just skits and the complicity of… Nations The United States is witnessing all that evasion, procrastination and procrastination without making the slightest effort to stop or end this absurdity.”

In the same context, journalist Taha Saleh called on the UN envoy to pressure the Houthi militia to abide by its commitments to open ports and implement the agreement, as it is the sponsor of the armistice and agreement and is able to put pressure on the Houthi militia.

He added, “Currently, there is no real pressure exerted on the militias, and what is happening is a farce, and all that is being implemented by the United Nations or its envoy is an attempt to keep the Houthi militias.”

As for the citizen, Hajj Muhammad Ali, he accused the UN envoy of applying double standards and adopting a contradictory principle based on selectivity in humanitarian files and exerting pressure on the government to implement its obligations, without any pressure in return to oblige the militias to implement what is agreed upon.

He added: “The UN envoy must leave the truce square, unveil the Houthis’ evasion and their refusal to implement the truce and the terms of the agreement, and take an explicit and clear position regarding the evasiveness that is happening and wasting time without any benefit.”

Al-Sahwa Net news website Awakening Net children envoy From internationalist.. Taiz the awakening to me To whom Wants What

Today, Republican Decree No. (7) for the year 2020 AD was issued regarding the formation of the government and the ...

The Abductees’ Mothers Association revealed a severe deterioration in the health of one of the kidnapped, who has been languishing ... 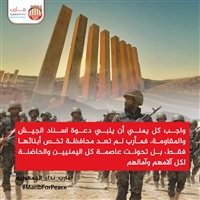 On Sunday evening, bloggers and activists on social media launched a major electronic campaign to support the National Army and ...