The Ministry of Foreign Affairs and Expatriate Affairs condemned in the strongest terms the Iranian-backed Houthi militia’s continued firing of ballistic missiles and booby-trapped drones towards Saudi Arabia and the United Arab Emirates, praising the capabilities of the Arab coalition forces and air defenses. Emirati In intercepting and shooting down missiles.

In a statement received by the Yemeni News Agency (Saba), the ministry confirmed that these terrorist and aggressive attacks, which deliberately targeted civilian objects and civilians, indicate the approach of the Iranian-backed terrorist militias and their disdain for the international community and their insistence on threatening the security and stability of the region, which necessitates the international community to fulfill its responsibilities and classify the militias as a group. An organized terrorist organization in order to achieve international peace and security and to restore security and stability in Yemen and the region.

It reiterated the firm position of the Republic of Yemen in support of Saudi Arabia and the UAE and its solidarity in all the measures and measures it takes to confront these cowardly terrorist acts, preserve the safety of their citizens and residents on their lands, and protect their vital facilities.

Today, the Manpower Authority organized a training workshop for the heads of the people and staff of the Ministry of ... 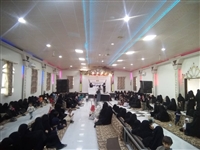 Today, an expanded meeting of the leaders of the women’s sector in Hajjah governorate discussed the role of women in ...

The Houthi militia pushed a crowd of its members and the sons of its leaders to study at the Higher ...