Yemeni women in the crosshairs of Houthi terrorism: killing, kidnapping and displacement

The International Day for the Elimination of Violence against Women is passing, and Yemeni women are living the darkest and harshest years of their lives in the areas controlled by the Houthi militia. Since the Houthi coup against the state in September 2014, 528 women have been killed and 805 others have been injured.

Women faced more than 4,000 cases of abuse at the hands of the Houthi militia, “killing, wounding, displacing, kidnapping and rape.

Activist Asmaa Murshid told Al-Sahwa Net that “the world celebrates the International Day for the Elimination of Violence against Women at a time when Yemeni women are suffering unprecedented cruelty that is unparalleled in the world.”

She explained that “the women of Yemen have tasted the bitterness of living without a state, and the pain of displacement, displacement and loss of loved ones due to the Houthi coup, which violated sanctities.”

She added, “There are millions of women living a life similar to starvation, and they cannot find anything to feed their children, while some of them have turned into housewives to support their family members after the breadwinner was killed as a result of the war.”

And she continued, “The Houthi militia has undoubtedly committed repeated violations against women, which has been known to arrest and torture many citizens, including hundreds of women.”

Sam Organization for Rights and Freedoms (a Geneva-based non-governmental organization) stated, in its latest report, that it had monitored more than 4,000 cases of violations against Yemeni women since the start of the war in 2015 until the end of 2020, “amounting to war crimes and crimes against humanity.”

The report added that “these violations included killing, bodily injury, arbitrary arrest, enforced disappearance, torture, and preventing movement, in addition to the displacement of more than 900,000 women in the Marib (East) camps alone.”

The report pointed out that “the Iranian terrorist Houthi group came at the forefront of violating women’s rights, with a rate of 70%.

In its report, the National Committee to investigate allegations of human rights violations confirmed that “Yemeni women live in conditions that are least described as inhuman.”

She explained that it had monitored the killing of 528 Yemeni women and the injury of 805 women during the period from the beginning of 2015 to the end of 2020, caused by the Houthi group in the first place.

Lawyer (Mahdi A.) assures Al-Sahwa Net that Yemeni women in Houthi-controlled areas face various types of violations, including the confiscation of their right to express opinion and demonstrate, as the Houthis have imprisoned hundreds of women in their own prisons and practiced various types of torture and violations against them.

He added, “These crimes do not fall within the statute of limitations, and all humanitarian and human rights organizations must win the rights of Yemeni women and consider what Al-Houthi has done as crimes that amount to war crimes that must be punished according to international humanitarian and human rights laws,” stressing that “all international and local human rights organizations must pressure The terrorist Houthi militia must stop these crimes against Yemeni women.”

The Houthi leader, Sultan Zabin, the Minister of Kidnappings and Violations against Women – who was exercising the functions of director of criminal investigations in the capital, Sanaa, which is under the control of the putschists – and who was subjected to international sanctions because of his violations against women, this time first In which a person is accused of this accusation in Yemen, sources close to Zabin revealed that he was arbitrarily and illegally detaining dozens of women, noting that the operations of the Ministry of Interior, controlled by the coup militias, had received many reports from citizens about the abduction of their female relatives by Sultan Zabin.

Human rights reports revealed that Zabin rented a residential villa on Taiz Street and turned it into a private prison containing dozens of female detainees, and this was considered a precedent that did not occur even in the Stone Age by renting villas and turning them into private prisons.

Those sources close to the Houthi group described the leader Sultan Zabin as a gangster who came to power and tampered with it and turned it into a tool to deprive the money, honor, blood and dignity of the people. into a profession.

In turn, the activist and lawman, Dr. Ahmed Al-Shaer, confirmed that Sultan Zabin, the leader in the Houthi group, “went on after reaching his destination of the prisoner, selling her freedom for imaginary sums, and for this reason Zabin became a real estate owner and according to the testimony of a well-known Houthi journalist, Muhammad al-Dailami.”.

And he continued, “Is this the Qur’anic march that they are talking about? Are these the supporters of God?” From the scandals of the mortal Zabin and his clients.

Al-Sahwa Net news website and displacement And kidnapping Awakening Net goal Houthi in a killing Terror the awakening To whom Yemeni:

Information Minister Muammar Al-Eryani reaffirmed the legitimate government’s position, keen to end the war and human suffering in Yemen. He ... 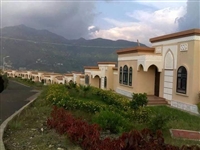 After years of armed control of the Haratha Tourist Park, southwest of the city of Ibb, the Houthi militia seeks ...