Yemenis in Malaysia commemorate the Yemeni revolution in September and October 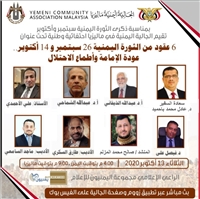 In his speech on this occasion, the Yemeni ambassador to Malaysia, Dr. Adel Bahamid, expressed his gratitude and thanks to the Yemeni Community Authority for holding this celebration, and called for the rejection of division and inter-conflicts and the breeding of entities, and for everyone to work for Yemen and restore the state.

Bahamid explained that there is no point in drowning in the details of past history, “what is important is to take lessons and lessons from the history of the revolution,” as well as changing behavior according to the ideology and philosophy of the Yemeni revolution.

The Yemeni ambassador said that the Yemeni revolution in September and October restored Yemen’s sovereignty and independence, and this is what should be done now in light of these circumstances and these coups.

The Yemeni ambassador called for the renewal of the will and the revolutionary spirit of the people, so that the decision is returned to the Yemenis, that everyone stands behind the legitimate leadership of the country, “Therefore, the Yemeni efforts must be unified to restore the state,” he said.

Dr. Al-Hajjaji explained that Yemen suffers from the ravages of nihilistic coups, which seek to tear Yemen apart sectarian, regional and ethnic groups. He referred to the human suffering that the Yemeni people are going through, in light of the international and international denial of this suffering, pointing to a remarkable harmony with sectarian and regional coups by some Western regimes, governments and organizations.

The head of the Yemeni community called on the United Nations and the Security Council to support legitimacy, and to implement international decisions related to Yemen, especially Resolution 2216 and all decisions that end the suffering of the Yemeni people. The sufferings of the “patient people inside and outside.”

Al-Shamahi noted that we cannot separate the Yemeni revolution in September and October, because it came to declare the freedom of the Yemeni citizen and the sovereignty of the people over their land. He said that the Yemeni revolutionaries brought together identity and citizenship, and therefore their revolution was one against reaction and occupation. He stressed that the global revolutions stood against the divine right in Europe and America, and he was surprised by some Western governments and regimes that support the Houthis who claim the divine right in Yemen.

In the second axis, Professor Abdullah Al-Dhaifani, Professor of Education and Cultural Counselor at the Embassy of Yemen in Malaysia, spoke about “A Historical Overview of the Yemeni Revolution September 26 and October 14” and stressed that Venice was not the choice of the revolutionaries in the Yemeni revolution in September and October, but science was their revolutionary choice. The first is that they went out in search of knowledge in a number of countries to bring experience and knowledge to Yemen.

He explained that the clubs founded by the revolutionaries in Yemen also worked to spread awareness, knowledge and literature, and the Yemeni Arab identity was rooted. The cultural advisor said that the revolutionaries saved the Arabism of Aden by teaching students to Arab countries the Arabic language. Colonialism worked to eradicate Arabic and teach its language to the children of merchants and sheikhs. Professor Al-Dhaifani explained that the Yemeni revolutionaries had known political work from an early period, and therefore they did not differentiate between north and south or between a first-class citizen and a second-class citizen, and therefore Yemen knew during that period a large group of political parties with different backgrounds.

In the third axis, Mr. Ali Al-Ahmadi, the official spokesperson of the resistance in Aden, Assistant Secretary-General of the Ennahda Movement, and the revolutionary activist in the 2011 Peaceful Youth Revolution spoke about “the thought and philosophy of the revolution and the concept of the Yemeni revolution.”

Calling the new generation to know all of that. Al-Ahmadi noted the need to understand the revolution’s thought, and not to deviate from the historical framework of the revolution and the time period in which the revolution took place. “It is not correct to judge the past with the facts of the present today.” For freedom and rejects tyranny, and therefore religious thought in Yemeni society rejected tutelage, dynasticism, tyranny and divine right, and the people went out in a revolution against the dynasty, noting that the thought of the revolution in Yemen stems from the Yemeni environment and reality, and the revolution’s philosophy was formed from the various ideas carried by the revolutionaries and formulated its goals and principles with their various inclinations. Intellectual.

In the fourth axis, Dr. Faisal Ali, head of the Yemeni Center for Studies, talked about “the role of communities in the resistance and the Yemeni revolution” and stressed the need for Yemeni communities, immigrants and expatriates, holders of the nationalities of the countries in which they settled, those with permanent and temporary residencies, asylum seekers, workers, students, employees and merchants Academics and researchers need to play their role in introducing the Yemeni issue, supporting the state and legitimacy in restoring the state, establishing the role of Yemeni communities in the past and the support they provided to the resistance and the Yemeni revolution in 1948, 1962 and 1963. The head of the Yemeni Center said that supporting the Yemeni people, the national army, local and legitimate authorities in Establishing the state’s rules, building its institutions, and restoring them from the priesthood authorities, groups and coups must remain a supreme goal for all communities, immigrants and residents outside Yemen.

The artist, Saleh Al-Muzallam, participated in the celebration of two revolutionary musical pieces that were well received by everyone. The writer, poet Tariq Al-Sukari, a member of the founding body of the Osan Literary Club, recited a poem entitled “The Awakening of Coffee,” and the coffee in the poem is a pun and an objective equivalent to the Yemeni identity. O heart, and print the kiss of sadness. ” I excited everyone.

The heroes of the National Army, backed by the popular resistance, broke out today, Saturday, by the Houthi coup militia ...

To compensate for its massive human losses on the Ma’rib fronts, the terrorist Houthi militia has forcibly re-recruited members of ...

The children of the parliamentarian martyr Rabish Ali Wahban Al-Ali handed over a “Hilux” car that was in the custody ...